The Game of Ringuette

Ringuette is a team sport on ice -- just for girls; from our beginner's Learn-to-Skate program to Provincial level competition. It is a fast paced, non-contact sport, played on ice with a straight stick and a hollow rubber ring. The sport emphasizes fun, sportmanship, and team participation. You can develop great skill, power and agility too! The season begins in September and ends in March or the beginning of April.

Ringette is a Canadian sport that was invented in 1963 in North Bay, Ontario by the late Sam Jacks. There are currently nearly 29,000 players on nearly 2,000 teams across Canada with over 2,400 officials and 5,000 coaches. Internationally, it is played in half a dozen other countries around the world. Ringette has been designated a Heritage Sport by Sport Canada and as part of the Sport for Life movement, ringette is well advanced at adapting Sport Canada's Long Term Athlete Development model.

How Ringette is Played

Ringette has been called the little sister to hockey. Its also been called floor hockey on ice. (Would you believe that the inventor of Ringette, Sam Jacks, was also the creator of Floor Hockey.) But, you know what? Other than the fact that Ringette is played on the same ice surface as hockey and the players skate, the resemblance ends there. Oh wait... we use the same goals and wear much the same equipment including goalie stuff.

But as I was saying, it is much more closely in tune with basketball, soccer, or even lacrosse without cross checking, than it is to hockey. Teams are usually made up of 11 to 17 players on a team. They play six skaters on the ice at the same time while at full strength. (a goalie, two defense, a center and two forwards) The object of the game is score a goal by shooting the ring into the opposing team's net. And of course, trying hard at the same time to prevent the other team from doing the same. 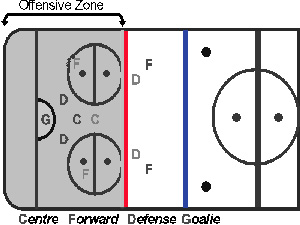 Zone Play - Any 3 In The deep offensive and defensive zones extend from behind the goal net to the Free Play Line - the thin red line at the top of the face off circles. (See shaded area in Figure 2) Within these deep offensive and defensive zones, each team is allowed only three skaters (not including the goalie) while at full strength. (See a standard Defensive Team setup with the Purple Letters designating defensive players in Figure 2) If a team has more than one penalty they are only permitted two skaters in their deep defensive zone.

The game begins much like soccer with the Visiting team being awarded a Free Pass in the Centre Ice Free Pass Circle. (Known in Hockey or Lacrosse as Face Off Circles). Free Passes are also ringettes way of restarting games after penalties, violations, goals or any other stoppage of the game such as when two players from opposite teams have joint control of the ring and it becomes frozen or immovable.

Free Passes in ringette are like free kicks or throw ins in soccer, like throw ins in basketball or like the quick restart in lacrosse after a violation. The ring is placed in the Free Pass circle, in the side nearest their own goal. (See shaded side of each circle in Figure 1) There is a small red dot painted on the ice for ring placement on a Free Pass. (see Placement Dots in Figure 1) One player takes possession and on the whistle has five seconds to either shoot or pass to a teammate; They must pass it completely out of the circle; they cannot skate out of the circle with the ring. During this five seconds no other player is allowed in the Free Pass circle. A shot on goal is permitted during a Free Pass.

Joint Control: Joint possession of the ring, or as the rule book calls it, "Joint Control," is when two or more opposing players place their sticks in the ring and it become immovable. The concept of the rule is very simple. The ring is awarded to the team gaining second control. That simply means the ring is awarded to the team that did not intially control it when that struggle for possession began. If the player first in control momentarily removes her stick from the ring, allowing an opponent to gain control and then takes joint control again, the ring is still awarded to the team that gained second control from the start of that play. Simple eh? Why? The reason for the rule is also very simple. Possession of the ring in ringuette is so important and by the very nature of the stick inside the ring, it is very difficult to 'take the ring away' from a player in possession. The rule used to be that when a defensive team attacked the ring carrier, often the player in possession would get tied up by a good check by the defensive team only to be given the ring back because they had initial possession. The rule was changed to *Second Possession* to encourage and reward defensive teams to attempt to gain possession. This rule has sped the game up immeasurably and reduced "ring ragging" as a concept of ring control.

Blue Line Violation: A player cannot carry the ring over a Blue Line in either direction. The ring must be passed over the blue line to another teammate. That teammate is permitted to skate ahead of the ring carrier and already be across the Blue Line before the ring crosses it. This is quite different than hockey where the puck must cross the Blue Line before any offensive player does. The requirement to pass the ring over the blue line, eliminates the situation where one player can carry the ring from one end to the other. It also is one of the keys to ringette being such a Team Game.

Goal Crease: If the ring lands in or on the crease the only player who can touch it is the goalie. The goalie usually picks up the ring and throws it like a frisbee to a teammate. The Goalie may not throw the ring beyond the Blue Line. If the Goalie does, then the offensive team regains possession on a Free Pass back inside the Goalies deep defensive zone. The goalie has five seconds to pass it out of her crease. She may also choose to hit it with her stick or skate, instead of picking it up and throwing it.

A Goalie Ring replaces a defensive zone Free Pass on all violations by the offensive team inside their offensive zone. On a Goalie Ring the goalie is given five seconds to throw the ring towards a teammate after the referee blows the whistle to signify restarting of play. The main difference between the Goalie Ring and a normal Free Pass is speed of restarting the game as play is not held up for player subsitition. This adds much to the speed and excitement of the game.

Two Blue Line Pass: There is no icing in Ringette, but there is a two line Pass, called slightly different than in hockey. The feet have nothing to do with it and there is no Center Ice Red Line in Ringette. When the ring crosses both blue lines, untouched, no player from the team that put it there can touch the ring till one of their opponents does first. For example, on an offensive two line pass, no member of the offensive team can touch it before the defense gets control of the ring. Touching it prematurely is a violation that sends the ring all the way back to the zone it originally was in for a Free Pass by the non offending team.

Penalties, similar to hockey, are called for various infractions. Most penalties in Ringette are very unintentional are are the result of accidently running into someone when trying to stop skating too late attempting to get a loose ring first; or when checking the ring carrier and missing the check on an opponent's stick. Rough Intentional Body Contact of any type is not allowed and the penalty for that is much more severe. However like basketball and soccer, bodies sometimes accidentally collide. Thats why the equipment rules, for protection. Games for players 14 years of age and over are two twenty minute periods. For younger players, and most recreational leagues of all ages, games fall into two 15 minute periods to allow them to be played in the 50 minute ice block commonly used by most arenas.

Violations, similar to basketball, are also called for various infractions, such as skating over the blue line in possession of the ring or unintentionally shooting or holding the ring out of play, or as detailed above, in the two line pass.

There are other technical rules, too many to list and explain in one article. Hopefully this article will give you, a feel for this game. If you have other questions please send an email to the webmaster below and he will either answer your question or pass it on to an expert if he doesn't know.

Let me say this in closing, Ringette is a fast-paced game both to play and to watch. Plain and simple, Ringette is an exciting team sport for girls and women that you can "Play for Life!"

This information is taken from the Ringette Canada web site